Paddy “The Baddy” Pimblett (16-3) is one of the most charismatic personalities in MMA. On Saturday, 9/4, he finally makes his deserved debut in the UFC. Known for his electric entrances in front of crazed hometown Liverpool fans, the 26-year-old is the former Cage Warriors featherweight champ. He makes his way to Las Vegas for his first fight in America and it all goes down at UFC Vegas 36.

Paddy was born in Liverpool, England in 1995. The Scouser still trains in his hometown at Next Generation MMA, alongside UFC fighters Molly McCann and Chris Fishgold. According to Tapology, Pimblett started as a bantamweight in pro MMA without a single amateur fight. From 2012 to 2014, bantamweight Paddy compiled a 6-1 record with his only loss coming to Cameron Else, a current UFC 135 pounder. Once established in England’s top MMA promotion, Cage Warriors, Pimblett climbed ten pounds to featherweight and captured the title in his sixth bout at that weight.

From 2017 to 2019, “The Baddy” dealt with a whole lot. He lost his belt to now UFC featherweight Nad Narimani after one title defense but he snatched the vacant belt right back in his next fight. Pimblett would then try the Conor McGregor Cage Warriors “double” (two belts at light and featherweight) and was defeated for the second time in three fights albeit to great competition in Soren Back.

While he couldn’t find a fight at all in 2019 after many opponents backed out, 2020 brought better fortunes for “The Baddy”. He stayed ten pounds up at lightweight and reeled off two first-round finishes. The UFC offered him a contract for his troubles and now he finds himself in Sin City with a game opponent for his UFC Vegas 36 debut. He takes on Luigi “The Italian Stallion” Vendramini (9-2) to kick off the main card and it goes down earlier than usual, 4 PM ET. 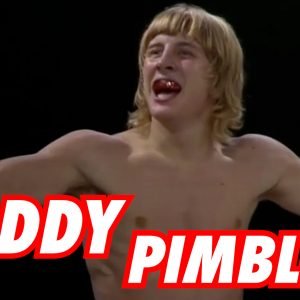 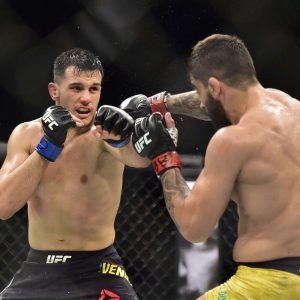