The UFC is targeting two title fights to top the bill of their December PPV.

Confirming one title fight on Monday, Amanda Nunes’ bantamweight title defence against Julianna Pena has been rescheduled for December 11th after a positive COVID test for the champion saw their UFC 265 bout scrapped.

Meanwhile in the second championship bout, Brandon Moreno is expected to take on Alexandre Pantoja for the former’s flyweight title per CageSidePress.

Nunes (21-4) is widely considered the greatest female mixed martial artist of all-time and currently holds the UFC bantamweight and featherweight championships. Becoming a dual champion with a first-round KO over Cris ‘Cyborg’ Justino in 2018, Nunes has remained undefeated since 2015 and defeated the likes of Ronda Rousey, Miesha Tate, Valentina Shevchenko (x2) and Holly Holm. Nunes last competed at UFC 259 in March where she defeated Megan Anderson with a first-round triangle armbar to defend her 135 lbs title.

Pena (10-4) has campaigned for a title shot against Nunes since recording her last victory in January after a third-round submission win over Sara McMann. Pena has assembled a 6-2 record under the UFC banner and holds wins over Jessica Eye, Cat Zingano and Nicco Montano. 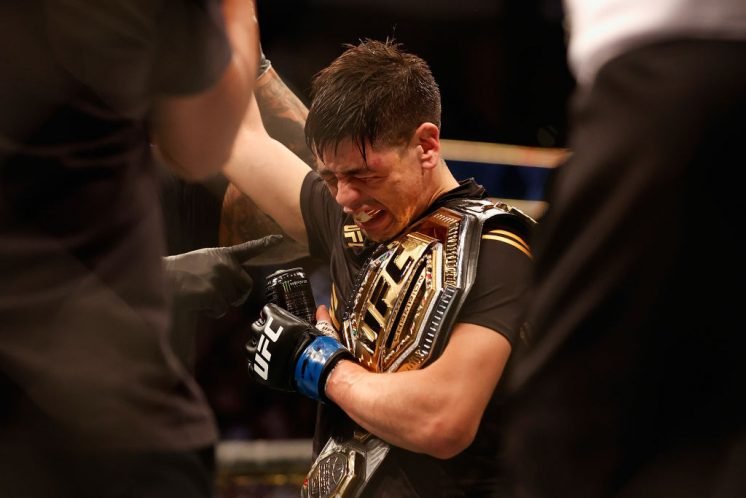 Moreno (19-5-2) would become the 125 lbs king in his last outing after a near flawless performance against Deiveson Figueiredo at UFC 263. Taking the title via third-round submission, Moreno is also unbeaten in his last seven fights, two of which being ruled a draw. Now in his second UFC stint, ‘The Assassin Baby’ has also defeated the likes of Jussier Formiga, Brandon Royval and Kai Kara-France.

Pantoja (24-5) meanwhile will enter his first UFC title fight coming off of a second-round submission win over Brandon Royval in late August. The Brazilian has won eight of his 11 fights under the UFC banner while winning 17 of his 24 career wins inside the scheduled distance. Pantoja, in addition to being the current #1 contender, has beaten Moreno twice during his MMA career albeit with one being an exhibition bout as a part of The Ultimate Fighter series.