Bryan Battle (5-1) has only been training MMA for five years but finds himself on the UFC doorstep as a middleweight finalist on the return of The Ultimate Fighter. He used to watch TUF on TV with his five sisters for “the man drama” and now he’s in the thick of the storm in Las Vegas. His opponent will be a semifinalist loser but due to injury, he steps into the final to fight “Pooh Bear” on short notice.

Bryan Battle was born in 1994 in Springfield, Maryland but now trains out of Charlotte, North Carolina with Coach Kevin “The Master of Cool” Forant. He played football, basketball, baseball, and soccer growing up but had absolutely no martial arts experience prior to starting training in 2016. In 2017, Battle took his first amateur fight weighing in as a heavyweight at 241 lbs. and got knocked out. He bounced back well racking up the most extensive amateur record compared to others on TUF, an 8-2 record with five finishes.

He dropped out of college and changed jobs to be a carpenter so he could pour all he wanted into MMA. Since 2019, he’s racked up five pro wins, four of which coming via stoppage. Two more wins on TUF has him primed to take home the title and the contract. He just has to defeat one more foe, in the form of Gilbert Urbina (6-1) at UFC Vegas 35. 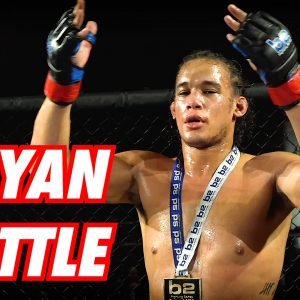