Jordan Leavitt (8-0) has spent more time celebrating than fighting in the octagon after picking up two first-round finishes – including a $50,000 bonus for his slam KO in his UFC debut. “The Monkey King” scored his promotional contract on The Contender Series by submitting his opponent in round one. He then secured victory four months later against UFC veteran Matt Wiman (16-10) with his 22-second slam while absorbing zero total strikes. He’s set to return to the exact same octagon for the third time in a row on Saturday, 6/5, at UFC Vegas 28.

The 25-year-old was born in 1995 in Las Vegas where he still lives and trains today. Having competed in wrestling through high school, Jordan would take home third place in state competition before going on to pursue higher education at The University of Nevada in Reno where he earned a degree in political science. During college, Jordan saw a season of UFC’s reality show The Ultimate Fighter and was immediately hooked on the sport of MMA. He still says he has law school aspirations, but only if he “sells out” and MMA doesn’t pan out.

Training out of Syndicate MMA in Sin City, Jordan has done nothing but win in the cage since he started his career. Dating back to amateur fights, Leavitt is on a 12-fight streak with 8 of those wins coming in the pro ranks. Leavitt’s resume can boast that he has not faced an opponent with a losing record, a rarity for fighters who honed their skills on the regional MMA scene.

The self-proclaimed “nerd” has read 79 books since 2020 started. 70 of those were finished last year and Leavitt says he’s “slacking” this year. Tough to blame him, his wife had a baby in February and he has been itching to fight since March. Jordan steps back into the cage to face Peruvian prospect Claudio Puelles (9-2) at UFC Vegas 28 and the prelims start at 4 PM ET. 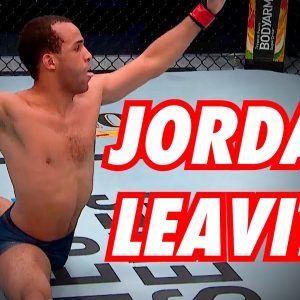 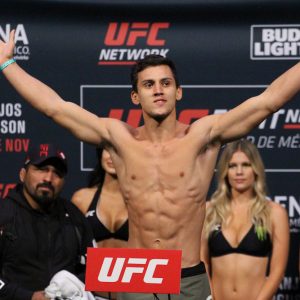