Carlston “Moçambique” Harris’ (15-4) life completely changed on January 15th when he submitted a 17 and 1 fighter in front of Dana White on his “Lookin’ For a Fight” program. White and company were set to offer a contract to Khabib Nurmagomedov’s teammate Saygid Izagakhmaev (17-2), however, when the underdog Harris tapped him in round two and explained his life story to the boss backstage, Carlston had a UFC pen and paper in hand.

33-year-old Carlston Harris was born in Skeldon, Guyana in 1987. Skeldon is a small coastal town with a population of around 2,000 on the east coast of North Guyana, smack dab on the border next to Suriname. Opportunities were thin for Harris growing up three hours away from Capital Georgetown, so he decided he needed something new.

Carlston travelled to Rio de Janeiro, Brazil, leaving his whole family behind to seek opportunities not available in Guyana. One chance immediately arose in the form of MMA and Carlston had found a passion and the train started rolling. “Moçambique” had no time for amateur, going straight into professional fighting back in 2011. Although he lost two of his first three bouts, Harris stuck with this unforgiving sport. He won his next seven fights, even conquering now UFC fan favourite Michel “Demolidor” Pereira (then 13-4, now 25-11).

Along his route to the UFC, Carlston found a second home in The Middle East, signing with Brave CF and capturing their welterweight title. Although he lost the strap from his only finish loss on his record, Harris stayed out east for the chance of a lifetime. Dana White accompanied by Khabib Nurmagomedov, Matt Serra, and Din Thomas were focused on signing Carlston’s opponent and Khabib’s teammate while filming an episode of “Lookin’ For a Fight”.

Harris squashed those plans by submitting him in round two and snatching that contract on the table. Four months later “Moçambique’s” stateside for his octagon debut in Las Vegas. Harris puts a three-fight win streak on the line against Christian “The Beast” Aguilera (14-7). It’s the third bout on the prelims for UFC Vegas 26 starting Saturday, 5/8, at 5 PM ET. 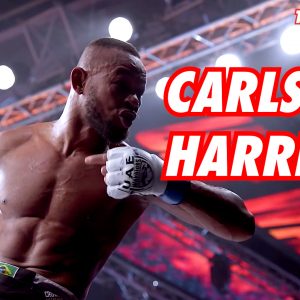 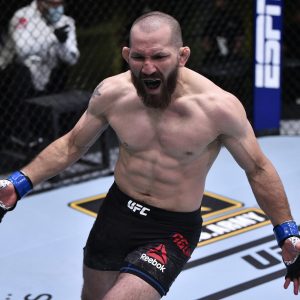