Aliaskhab Khizriev (13-0) is yet another undefeated Dagestani out of Eagles MMA in Makhachkala, Dagestan, Russia. “The Black Wolf” won his UFC contract on Dana White’s Contender Series in September 2020 courtesy of a rear-naked choke 50 seconds into round one. Fast-forward six months later, he’s back in the same octagon at the Apex Center for UFC Vegas 23.

Aliaskhab was born in 1990 in Makhachkala, Russia, the capital of The Republic of Dagestan located in the Southern Caucasus. He adds to many recent undefeated wrestlers out of the area that have come stateside to find MMA success at the highest level. Unsurprisingly, Aliaskhab’s younger brother Timur “Imam” Khizriev is another unbeaten fighter out of the same camp, to the tune of 10-0. The elder Khizriev immediately showed his potential at the amateur level, capturing Dagestan and the entire Russian Amateur MMA championships titles before moving up.

After running through anyone and everyone in the region at welterweight, he captured Russia’s highest-level MMA belt with Fight Nights Global. At 12-0, “The Black Wolf” got the call from Dana White and his Contender Series in September 2020. Aliaskhab moved up to middleweight but needed less than a minute to choke out his opponent and earn a well-deserved UFC contract.

Aliaskhab Khizriev now returns to the exact same octagon at the Apex Center in Sin City six months later for a very intriguing matchup of top prospects. Kyle Daukaus (10-1) wants to become the first to best Khizriev and he has the tools to emerge victorious. The Philadelphia product owns a 6-inch height and 2-inch reach advantage and this fight is rightly slotted just before the co-main event and it all starts at 8 PM ET on Saturday, April 10. 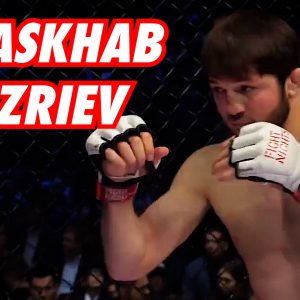