Casey O’Neill (5-0) rides a 10-fight win streak dating back to her amateur days and she’s the UFC’s newest prospect in the budding women’s flyweight division. MMA has brought “King” Casey around the world and her latest destination is the Nevada desert, where she makes her octagon debut at UFC Vegas 19.

The 23-year-old was born in Scotland in 1997, thirty minutes southwest of capital Glasgow in Kilmarnock. Father O’Neill has roots in martial arts and introduced young Casey to kickboxing. The family moved when she was 10 years old to Queensland, Australia and her MMA journey took a back seat while settling in down under.

After a couple of years in the Southern Hemisphere, “King” Casey wanted to get back into her martial arts groove and found Brazilian Jiu-Jitsu. It wasn’t long after she accepted her first fight in 2014. Her father founded an MMA promotion in Australia at the time, however, was hesitant about her competing and instead found her early home with Eternal MMA.

O’Neill lost her first amateur bout at only age 15. Her coach at the time suggested MMA might not be in her cards. She took the criticism as well as possible and began to construct a 10-fight winning streak from amateur through the professional ranks.

Casey O’Neill absolutely sprinted through her competition down under, even forced to weigh in all the way up at bantamweight to find a fight. Now comfortably at 125 lbs. Casey takes her winning streak into the octagon at UFC Vegas 19. She’s got a tough test in Shana “Danger” Dobson (4-4) fresh off her 2020 upset of the year victory. It all goes down Saturday, 2/20, and the prelims start at 4:30 PM ET. 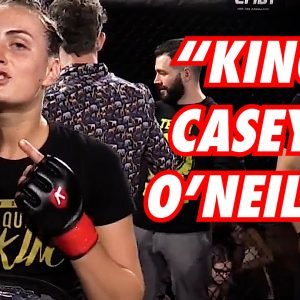 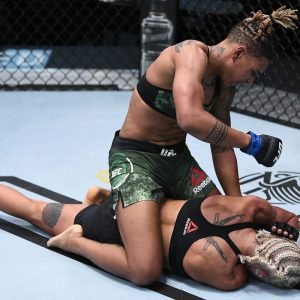