Miranda “Fear The” Maverick (8-2) is taking a short study break this weekend as MMA’s most intriguing woman is flying to Sin City for a big matchup at UFC 258. The UFC flyweight is gaining steam as a future force in the division, truly amazing because fighting isn’t her lone focus.

Miranda Maverick was born in 1997 in Tunas, Missouri, a small town located an hour south of The Ozark’s. The 23-year-old has been a farmhand since age eight, developing a work ethic like no other on the family farm. According to Miranda, her father taught all the Maverick kids basic stand-up martial arts and jiu-jitsu. She watched her first UFC fight at 14 and signed a contract for her first amateur fight just a month later.

To find a gym to train, Miranda ventured out of Tunas, one hour south where she found Springfield MMA Academy. She started fighting amateur in 2015 at age 18, finding much success to the tune of a 7-1 record. One year later, she switched pro and won her first three bouts against top competition in Invicta FC. Throughout training and competing, Maverick never stopped school. She graduated high school and college before setting sights on a Ph.D. in “Industrial Organizational Psychology” from Old Dominion University in Norfolk, Virginia.

In addition to studying, Norfolk offered Miranda a more diverse MMA scene and she moved camp to House of Muay Thai and Norfolk BJJ under coach Mackens Semerzier. While travelling all over to find the best MMA fit, the one thing that has stayed consistent is her commitment to her family. Her father has been in her corner for every fight and she homeschools her siblings on the off chance she has a day off.

“Fear The” Maverick currently rides a six-fight win streak after dismantling her opponent in round one via TKO doctor stoppage on ‘Fight Island’ in October 2020. She takes her second fight in the octagon four months later against Gillian Robertson (9-5) at UFC 258. 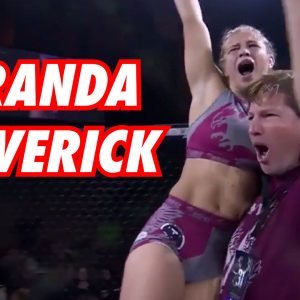 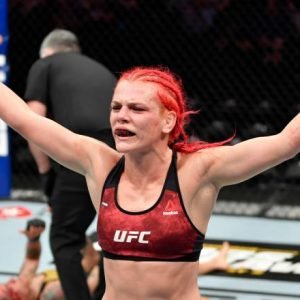