Tomasz “Żyrafa” Narkun (18-3) is the current KSW light heavyweight champion whose game revolves around special submission skills and a dogged determination. In the cage, it’s evident that the 31-year-old simply loves fighting, smiling through any adversity as if he enjoys opponents who bring the battle to him. His combination of elite grappling, robust kicking, and fantastic distance management make his MMA puzzle a tricky set to solve.

Tomasz Narkun was born in 1989 in Stargard Szczecinski, Poland and stays true to his roots to this day. He still fights out of his hometown representing Berkserker’s team; arguably the biggest MMA outlet in Poland with numerous gyms around the country. The black belt in Brazilian Jiu-Jitsu made his professional MMA debut in 2009 without any amateur competition and relied heavily on his BJJ to jump out to a four-fight submission streak.

“Żyrafa” means giraffe in English and the 6’3″ Pole stood tall against his early competition, impressing Russian fans enough to challenge for the M-1 Global title in just his fifth fight. Although he lost his first championship test, the horizon still shined bright for Narkun’s prospects. He was tapping out anyone and everyone with nine straight wins by submission, seven of which coming in the first. The domination earned 9-1 Tomasz a title contender chance with his home country promotion, KSW.

Narkun narrowly lost his second fight by majority decision to UFC veteran Goran Reljic (then 11-2), who would win the KSW 205 lbs belt in his next bout. Tomasz earned a rematch against the champ with another round one submission and this time, he turned a corner in his career. “Żyrafa” knocked out his first-ever opponent and wrapped the KSW belt around his waist.

From 2015 to 2020, Narkun racked up an 8-1 record and faced the absolute best KSW had to offer. In the process, he bested Europe’s top middleweight Mamed Khalidov (35-7-2) twice before losing a close decision to heavyweight champ Phil De Fries (19-6). Two straight victories have Narkun streaking into 2021 with an eye on his next test. With no fight set, he’s a prime target for a UFC contract and hopefully a Fight Island debut for one of Europe’s brightest stars.

Will Tomasz Narkun make his UFC debut in 2021? 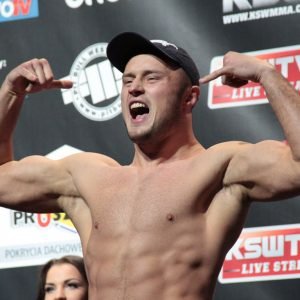 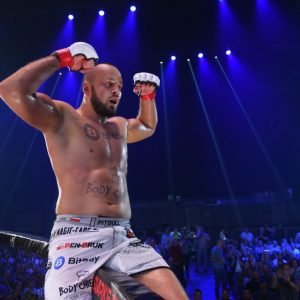