Khaos “The Oxfighter” Williams (11-1) has spent 57 seconds in the octagon over two UFC fights, emerging victorious with two KO’s and $100,000 in bonuses. You truly cannot do any better than those results and on Saturday, 12/19, Williams aims to keep the chaos going at UFC Vegas 17.

Khaos didn’t always have the moxie to go by his own name. He was born in 1994 and grew up as Kalinn Williams. He spent his adolescent years around Jackson, Michigan, about an hour west of Detroit. Growing up in a rough neighbourhood, Kalinn seemed to always find himself at the centre of the cul-de-sac chaos and earned his name from friends in his circle.

In 2013, Khaos should have been a high school senior but instead found himself behind bars for selling cocaine. Williams made the absolute most he could with the circumstances, getting released five months later with a diploma in hand. Khaos was recognized as the first person to graduate high school in the Jackson County School System through the Jackson County Jail.

In an effort to find extracurriculars that wouldn’t get Khaos into trouble, he found mixed martial arts in 2013 and fell in love. Williams ceased all classes he was taking at Jackson Community College and started fighting full-time at Murcielago MMA in Lansing, 40 minutes north of Jackson and an hour west of Detroit. His training partners told him he possessed “strength like an ox” and the nickname stuck ever since.

In February 2020, seven years of hard work by Khaos paid off in the form of a UFC contract. At UFC 247: Jones vs. Reyes, Khaos came out of the octagon with a 27 second knockout over 170 lbs veteran Alex Morono (then falling to 17-6). Just last month, “The Oxfighter” fought fellow KO artist Abdul Razak Alhassan and won the battle and the war, devastating him with a walk-off one-punch KO in 30 seconds.

You truly cannot do any better in your first two UFC fights. Khaos will look to extend the KO streak to three on Saturday, December 19, against fan-favourite Michel “Demolidor” Pereira (24-11). This shapes up to be a barnburner and it goes down on the main card of UFC Vegas 17 starting at 7 PM ET (prelims at 4 PM ET). 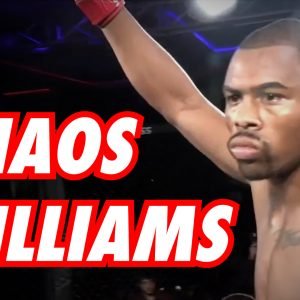 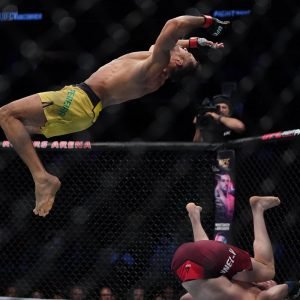