Kay Hansen’s (7-3) UFC debut was an absolute roller coaster ride lasting one whole week. Then 20 years old, Hansen got the call in June from UFC matchmakers while she and her sisters were at Starbucks in the drive-thru. She jumped on the opportunity she had been working years for, and one week later she was staring down opponent Jinh Yu Frey (then 9-4) in the octagon.

With a week to prepare, Hansen had nothing resembling a regular build-up to her first UFC fight. 10th Planet Jiu-Jitsu Buena Park, Kay’s home base, was closed due to COVID, and her only training to get fight ready consisted of a couple of rolls on the mat with her BJJ partners. Hansen handled the adversity like a champ and looked the part in the octagon too, winning a tough debut matchup by round 3 triangle-armbar.

Kay Hansen got into the sport through UFC Hall of Famer and former bantamweight champion Ronda Rousey, aiming to adopt her unwavering mindset. The Hansen family would regularly attend UFC events, but young Kay always wanted to be anywhere else. That completely changed when she saw Rousey defeat Bethe Correia in 2015 with an aggressiveness and attitude that made MMA finally click for her.

Hansen found a nearby BJJ gym, took a class, and put down her softball gloves for a gi and never looked back. She was all set to attend Harvard for softball but couldn’t stop scratching the fight itch and took her first fight in 2017. She started training with her eyes always set on the UFC strawweight prize, and marks an interesting new chapter in women’s MMA. A new wave of fighters who have been directly inspired by greats like Rousey and have trained specifically for MMA are now making their mark.

At age 18, Hansen entered the Invicta FC ranks, becoming the youngest ever combatant in the premier women’s MMA promotion. Her record might not scare opponents, but her skills should. Kay has only fought talented opponents and learned her game while competing in the cage. Hansen’s skills on the mat are lethal, and her striking gets better with every bout. Kay aims for an eighth win and four straight versus Cory McKenna (5-1) the UFC’s first Welsh women’s fighter. It all goes down Saturday, 11/14, at UFC Vegas 14, prelims start at 4 PM ET. 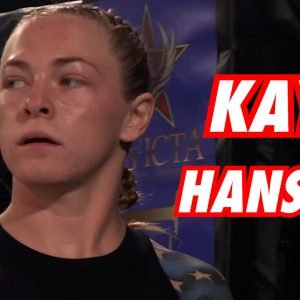 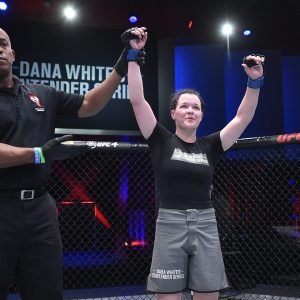